How Do Solar Panels Hold Up in a Hurricane?

Emerald Sun Energy / Solar Companies / How Do Solar Panels Hold Up in a Hurricane? 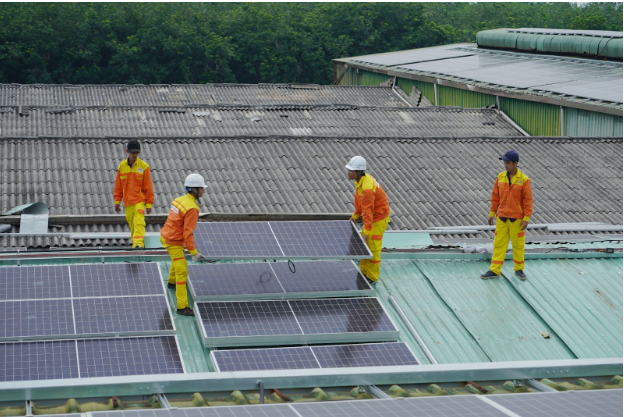 How Do Solar Panels Hold Up in a Hurricane?

The state of Florida is at the most risk of damage from hurricanes in all of the United States. It also incurs the most cost in reconstruction after hurricane hits.

In many cases, hurricanes can cost Florida about 3 times as much as the second-most impacted state, Louisiana.

Hurricanes also leave a lasting impact. Besides the financial damage dealt, people are left without electricity for long periods of time. Electricity supply chains can even take months to get going.

Since Orlando is also a sunny city, the most logical solution to this problem is to invest in solar energy.

Also, consider a study's findings that solar panels increase the value of a home by about $15,000.

There may still be many doubts before contacting a solar contractor in Orlando. We are here to clear them for you using real-world examples in the United States.

So, is a solar power investment safe in the state of Florida?

Solar panels installed by trusted solar energy companies in Orlando withstand elemental forces such as hurricanes astonishingly well. Contrary to intuitive thinking, solar panels from reliable solar power companies do not stop producing power in conditions such as hurricanes. They are also remarkably sturdy to the forces of nature.

A study finds that solar panels continue to generate power during hurricanes, even if direct sunlight is unavailable. Take the practical example of the VA hospital in San Juan, which continued to operate at 100 percent during a hurricane on solar power.

Solar power installation is vital as hurricanes, an uncontrollable force, leave large areas without power for extended periods. In many regions of the United States, cities hit by hurricanes go for months without power.

Since most solar panels are installed on rooftops to absorb unobstructed sunlight, one could conclude that they are also highly susceptible to wind.

So, how true is that assertion?

There is historic precedence for solar power in coastal regions to withstand strong winds. Solar power companies claim that their rooftop installations were unfazed by Hurricane Sandy. Hurricane Sandy, being a category-3 hurricane, had a maximum sustained wind speed of 110 mph!

What force puts the most pressure on rooftop-installed solar panels in the case of high winds? It is the Uplift Force.

However, if a reliable Solar contractor in Orlando has done your solar panel installation, there is little to fear. Uplift force is most damaging in cases of structural fragility, negligence or extreme hurricanes.

For most hurricane events, an excellent solar power company in Orlando would ensure that uplift forces have no effect.

So, the wind does not affect solar panels. The only worry might be of the wind tearing the panel from the very roof, but that can be minimized by only contacting a trusted solar contractor in Orlando.

Can Solar Panels Work During Raining?

The solar panels themselves are waterproof. Solar power companies take great care to test their products against heavy rain.

Solar energy continues to function in the rain as well as in any other weather condition – and is only concerned with the amount of horizontal irradiance, i.e., the amount of solar energy they can receive.

In fact, the rain may wash away dust and oil from the surface of the solar panels.

Solar energy companies ensure that solar panels are installed so that even heavy rainfall does not affect power production or the installation's life.

Hail is one of the most formidable forces of nature. Are solar panels well-equipped to deal with these conditions?

Take the example of a severe hailstorm in Denver. It completely shattered many car windows and left dents the size of golf balls.

However, there was an astonishing finding on the main campus of the National Renewable Energy Laboratory. After the hail storm, only one out of more than 3,000 solar panels was destroyed.

Solar power companies in Orlando ensure that their products are guaranteed to withstand severe hailstorms. They are certified to stand up to even 1-inch hails falling at high speeds.

Hurricanes are extreme forces that put all man made structures to the test.

However, solar panels are wonderfully resistant. All tests that hurricane throw in their way, they pass astonishingly well.

Your solar power company should also provide expert advice on where the solar panel installation must be done. An expert would look at your residence and advise you on topics such as:

What Happens During a Hurricane?

Incredibly, solar power companies create a functional product in weather conditions without visible sun, such as hurricanes. How is that possible?

A study creates a quantitative analysis of 18 hurricane events. It concludes that power generation continues during events where direct sunlight does not happen. In fact, it finds that there is solar power available to be absorbed during daytime hours even though the sky is cloudy and raining. This energy is quantified as Horizontal Irradiance.

Due to the light diffusion in the sky, the horizontal irradiance never becomes zero. Hence, we can witness incredible cases like an entire hospital staying 100% functional without 11 months of power after hurricanes.

So, if solar energy companies can provide a reliable piece of machinery in such extreme conditions, solar power companies in Orlando will definitely be able to provide you with equipment that withstands hurricanes.

During hurricanes, energy is cut off abruptly and for long periods. The hospital mentioned earlier was a part of the most prolonged blackout in US history. Most other cases are not very reassuring either. Hence, solar energy installation in Orlando is vital.

Energy Issues in Orlando After Hurricanes

Let’s take the specific case of the state of Florida since it is also the most vulnerable to hurricanes.

A study shows that energy generation in the state of Florida can decrease beyond an astonishing 70% in large regions during a category-4 hurricane. This statistic even includes undamaged solar energy infrastructure in Florida.

The electricity grid may become fully offline in some cases. Solar energy companies in Orlando are vital in sustaining infrastructure not only during a hurricane but also during post-hurricane periods.

As an example, during hurricanes Camille and Laurie, two solar panels were operating without any drop in performance.

Solar energy companies must perform extensive tests on their products before putting them on the market. This is especially true for states that are susceptible to extreme weather.

These tests check for:

These ensure that even during hurricanes, solar energy companies in Orlando can provide reliable sources of power during conditions such as lasting blackouts.

Time after time, real-life examples appear which attest to the assurances given by solar energy companies in Orlando.

What Happens After a Hurricane?

Expect long periods where energy production does not perform at 100%.

Shorts in electricity, especially in flooded regions, can be lethal. People must ensure that all wires are in good condition after a hurricane.

Do solar panels need to be taken care of after a hurricane? No, because the panels themselves are highly resistant to extreme weather.

In many cases, solar energy can become more efficient after heavy rainfalls. This is because the solar panels are now clear of dust and oil.

Contact the customer service of your solar power company in Orlando for inspection and assistance.

How to Prepare for Hurricanes to Keep Your Solar Panels in Place?

The best thing to ensure the safety of your solar installation is to contact an expert. Expert assistance and advice should be available from the solar contractor near you.

The expert will consult you on the following:

Occasionally inspect your solar panels. Clean them with microfiber clothing or water. Contact your solar power company in Orlando in case of irregularities.

The most important thing to consider around solar installations is the manufacturer and installer. Solar energy installations are surprisingly resilient to the most extreme of forces in nature and continue to generate power during and after hurricanes. Orlando is also blessed with sunny weather on most days and is ideal for solar power investment.

Click here to schedule an appointment with the most trusted solar power company in Orlando.